"I can't say enough how much I enjoy reading this series. It is innocent, well-written, and grips the reader from the beginning."  Nicole Story - reader review

Gerald and the Wee People 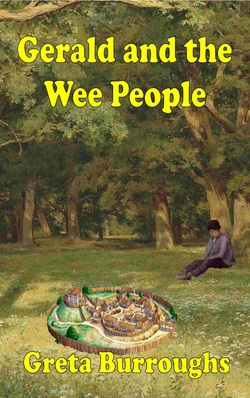 Two teenagers respond to a plea for help and literally fall into another world. They become involved in a war and invent some clever plans to temporarily prevent the enemy from entering the village of the wee people. Time is running out, the gates are getting weaker and the weapon stash is dwindling. Something else has to be done to stop the war.
Gerald, Vernon and six companions embark on a quest to defeat the crazed forest god who is set on destroying all the inhabitants living on that world. They follow a path described in an old prophecy but things do not go as planned.

This time it was no illusion. The walls burned their hands; the hot air burned their throats. The floor was sticky with some kind of hot substance, burning their feet through their shoes.
They began to hear a distant sound like the laughter they had heard earlier. Cian fell to his knees and cried out in pain as the scalding liquid burned his skin. “I can’t go on, just leave me here to die,” he screamed.
Tomas reached out to his brother trying to help him up. It was no use; he was too weak and exhausted. In a very weak voice he said, “You all go on. I’ll stay with Cian. I can’t go another step anyway.”
No one else said a word. The others were too tired to talk, too tired to walk, too tired to care.
This was not supposed to be happening. Gerald did not remember this from his nightmares. Something was wrong.
He yelled to whoever was listening, “Did we take a wrong turn or something? Stop it Miach, stop it. You want me, leave my friends alone.”
That just made matters worse. The scampering, unseen creatures came out of nowhere. They did not just run past this time but stayed and started pinching and biting the legs and arms of Gerald’s companions.
For some strange reason though, the creatures did not bother him.
All four of his companions were down, rolling around on the ground trying to fight off the shadowy figures. The screams intensified from his friends as the burning liquid covered their bodies and the creatures’ biting turned to gnawing.
Gerald could hear pieces of flesh being torn away as the other boys were being eaten alive. The laughter was all around them now bouncing off the walls and echoing through Gerald’s head.
“Stop it, stop it now. Please, I’ll do anything you want, Miach. Stop the noise, stop torturing my friends.”
Total silence fell; all the gnawing, screaming and laughter were gone. Gerald did not know if the total lack of sound was worse than all the noise.
He noticed a light shining above him. He looked around and realized he was all alone.
A voice spoke inside his mind and said, “Anything I want, huh,” followed by a soft, haunting chuckle.

You can get your copy of Gerald and the Wee People in digital format (ebook) from:
Amazon US
Amazon UK
Amazon CA
Barnes and Nobles
Smashwords 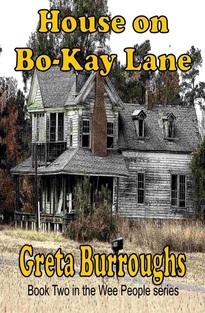 Gerald and Vernon believe their time with the wee people came to an end after they returned to their home world but begin to wonder when strange things started to happen at an abandoned house in their neighborhood.
Ghostly images of familiar faces from the wee people village are seen in the windows, echoes of voices from the past haunt the boys’ dreams and an undeniable curiosity draws Gerald and Vernon to investigate the mysterious haunted house. What they find takes them back to the world of the wee people and a new adventure begins.

A sense of peace washed over the young man as he sat on the rock. Something inside him gave him a second wind and the determination to complete his mission. He looked at his hands. They were a raw, bloody mess. He had held onto the rope during the fall which probably saved his life. The rope kept him from gaining too much speed during his downhill slide, but it cost him dearly. All the skin on his hands had been rubbed off.
Tomas’ shirt was in tatters, nearly ripped off him by the protruding obstacles during his fall. There was an advantage to that though. It made it easier to tear off strips of material to wrap around his throbbing hands. He wrapped one long strip around his chest, resulting in each breath being a little less painful.
He was ready, or at least as ready as he would ever be. Tomas stood, grabbed the rope and began the process over again. Two steps, move hands, two more steps, move hands; he got back in to the familiar rhythm.
Tomas thought of nothing else. The voices from above were silenced, the pain in his ribs subsided, the ache in muscles relaxed. All he could hear was the beating of his heart; all he could feel was the roughness of the rope tearing through the strips of cloth. He could taste the sweat dripping from his forehead down to his parched lips. It was like a dream, he was there, but not really there. He could visualize his body slowly inching up the slope as if he was watching with the others from above. Then again, he knew his life depended on each step. It was up to him and him alone to win this fight with fate.
The young man reached up and grasped nothing, no mud, no rope, just a handful of air. Seconds later, many hands grabbed his and pulled him up onto the solid flat ground. The tension and stress from his ordeal caught up with Tomas at that moment, and he began to cry. Big wracking sobs releasing the pain, fear and relief tore from his throat. No one thought any less of the muscular teenager for his show of emotion; actually everyone joined him and shed their own tears.
It was a very somber group that returned to camp late that afternoon.